6 African American Photographers Who Advanced Civil Rights Through Their Art

Civil Rights Through Their Art

Their accomplishments were astounding considering the odds against their success due to  segregation and prejudice. Through their technical excellence and storytelling through image, they fought racial stereotypes and injustice.

Among these photographers, two won Pulitzer Prizes for journalism. Others created successful studios that captured the rise of a black middle class in the early 20th century. All are remarkable artists in their own right.

“I saw that the camera could be a weapon against poverty, against racism, against all sorts of social wrongs. I knew at that point I had to have a camera.”

Photographer, filmmaker, musician and novelist Gordon Parks was born in Fort Scott Kansas in 1912, an era where racial violence was commonplace. After his mother died when he was 14, Parks moved in with relatives in Minnesota, but soon after became homeless.

He began his photography career in 1941, after purchasing a second-hand camera in a Seattle pawnshop. After seeing his work for a women’s clothing shop in St. Paul, Minnesota, Mrs. Joe Louis encouraged Parks and his wife to move to Chicago and start a portrait studio.

His exemplary work led to him winning a 1941fellowship with the Farm Security Administration (FSA), which was tasked with documenting the nation’s social conditions, under the direction of Roy Stryker. 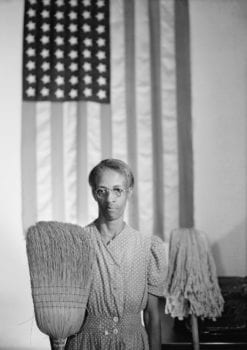 Working under Stryker, Park’s created one of his most well-known photographs, American Gothic.

This racially charged photograph was inspired by Parks’ daily encounters with segregation in Washington, D.C’s restaurants and shops.

The subject of the photograph, Mrs. Ella Watson, was a part of the cleaning crew that worked on the FSA grounds.

Upon viewing the photograph, Stryker commented that it was an “indictment of America” that could get all of his photographers fired.

Yet he encouraged Parks to keep working with Watson to document the inequalities in American society between African Americans and whites.

Another of Park’s major works of this era was a series of 1943 photographs depicting a racially integrated camp in New York state.

The photographs depicted children playing together, cooking and enjoying the fun of summer camp.

For a still largely segregated American society, these photographs showing racial harmony were a revelation. 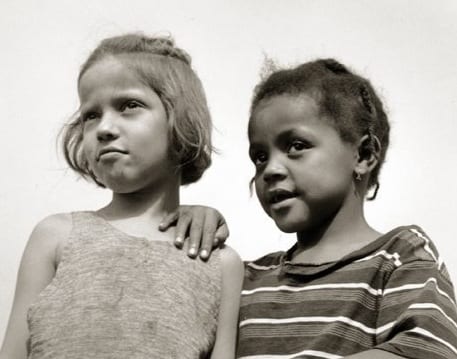 Career After the FSA

After the disbandment of the FSA, Parks remained in Washington as a photographer with the Office of War Information. He later followed Stryker to the Standard Oil Photography Project, which documented life in small towns and industrial centers.

Upon resigning from the War Office, Parks became involved with fashion photography again and was featured in Vogue magazine, despite racial segregation that stacked the odds against his success.

But it was during his career as a photojournalist that Parks received the recognition he was due.

In 1948, Parks became a staff photographer for Life Magazine, the premier publication of its day. His association with the magazine lasted until 1972.

During this time, Parks became one of the most celebrated photojournalists in the U.S., photographing celebrities such as Barbra Streisand, Muhammed Ali, Malcolm X and Stokely Carmichael as well as capturing sports, fashion and documenting poverty and racial division.

During Parks’ tenure at Life, the March 8, 1968 edition featuring Parks’ portrayal of the shocking living conditions of the Fontanelle family, living in abject poverty in Harlem rocked the nation at the height of civil rights unrest.

As well as achieving fame as a photographer, Parks was a celebrated filmmaker and musician (directing the screenplay for the hit movie Shaft, as well as composing the score).

Parks passed away in Manhattan at the age of 93. 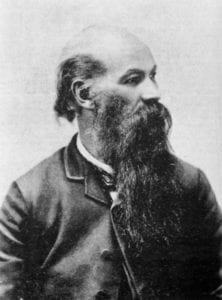 James Presley Ball was a master photographer who used his craft to fight against slavery in his abolitionist campaigns.

Ball was a man whose photography skills evolved along with the technology of the times. An astute businessman who founded a thriving community of artists, Ball started his business offering his clientele expensive daguerrotypes.

He later embraced the less costly photographic print to draw a larger clientele and thus maximize his earning potential.

One of the Most Celebrated Galleries in the West

Ball’s Cinninati-based ‘Great Daguerrian Gallery of the West’ became one of the most famous and celebrated photography galleries in the U.S. He used his fame in campaigns to abolish slavery.

The panorama consisted of 2,400 yards of canvas that was slowly unrolled before an audience. The work exposed the shocking conditions his fellow African Americans endured under slavery.

Sadly, this work has been lost.

In September 1887, Ball was honored as the official photographer of the 25th-anniversary celebration of the Emancipation Proclamation.

He moved west and became a prominent figure in Helena, Montana. He was active in politics and established a studio there.

In his last years, Ball relocated to Honolulu in 1902 to find relief for his rheumatism. He passed away there in 1904.

James Van Der Zee was born in Lennox, Massachusetts and received his first camera in 1900, at the age of 14. As the owner of one of the few cameras in his hometown, Van Der Zee was often called on to document events in his community.

After moving to Newark, New Jersey in 1915, Van Der Zee was employed as a darkroom and photographer’s assistant. After relocating to New York City in 1916, Van Der Zee established his first photographic studio in his sister’s music conservatory. 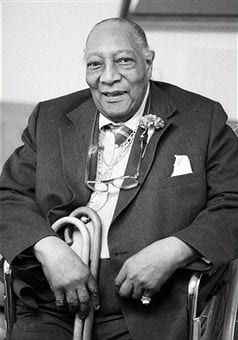 The Photographer of the Harlem Renaissance

Within two years, he opened up the Guarantee Photo Studio in Harlem. He quickly became the most successful photographer in the Harlem district of Manhattan. 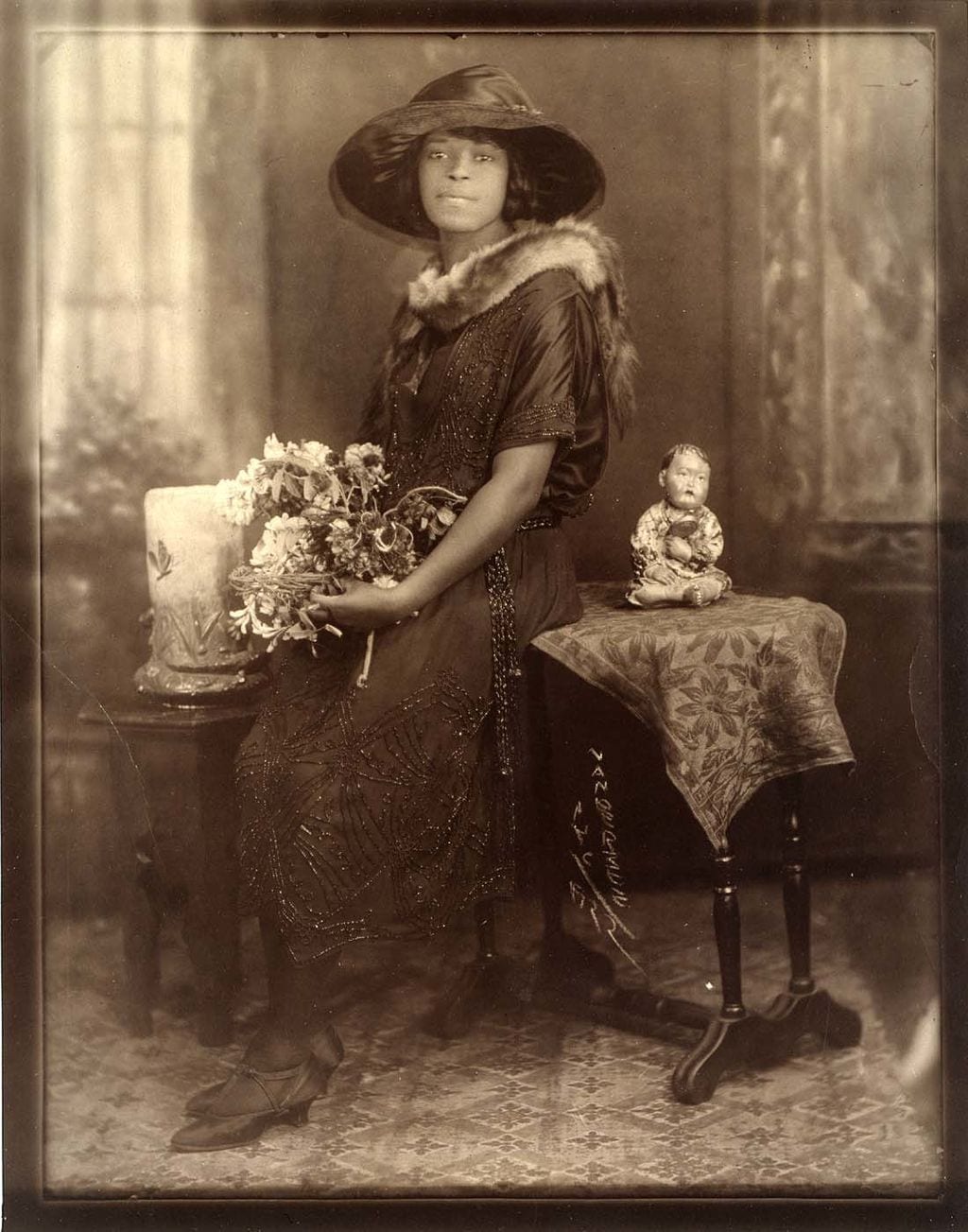 Van Der Zee’s technically proficient studio work featured props, retouching and double exposures. He often was asked to capture important happenings in the lives of his customers such as weddings, funerals and social events.

Van Der Zee’s photographs lent an aura of glamour to his subjects and he went out of his way to make them look good.

“I tried to see that every picture was better-looking than the person … I had one woman come to me and say ‘Mr. VanDerZee my friends tell that's a nice picture, but it doesn't look like you.' That was my style”, said VanDerZee.[6]

In 1924, Van Der Zee was asked to document the members and activities of the Universal Negro Improvement Association (UNIA) to portray a positive view of the Association – despite the controversy surrounding its creator, Marcus Garvey.

During the Depression, the demand for portraiture dried up due to economic circumstances and the increase in numbers of personal cameras. Van Der Zee responded to the challenging times by doing passport photos, photo restorations and other miscellaneous photography jobs for the next decades.

Featured in ‘Harlem on My Mind’ at the Met

In 1967, Van Der Zee rose to worldwide fame after he was featured in a Metropolitan Museum of Art Exhibit titled “Harlem on My Mind.”

It was mere chance that Van Der Zee was featured after exhibit researcher Reginald McGee walked into Van Der Zee’s studio and asked him if he had any photographs from the 1920s and 1930s.

Because of this accidental discovery, Van Der Zee’s legacy is still with us today.

Pulitzer Prize-winning photojournalist Moneta Sleet Jr.’s fascination with photography began when his parents gave him a box camera as a child. But he didn’t decide to pursue a career in photography until attended Kentucky State University as an undergraduate.

Initially enrolled as a business major, Sleet made the switch to photography after he landed a job as an assistant at a photo studio operated by one of the deans at KSU.

After graduating from Kentucky State, he went on to receive a Master’s degree in journalism from New York University in 1950.

Sleet’s first job was as a sportswriter for the now defunct Amsterdam News, a black newspaper in NYC.

In 1955, Sleet joined the Johnson Publishing Company and began shooting photos for Jet and Ebony magazines. He went on to spend four decades with the company, covering the U.S. Civil Rights movements, including the 1963 march on Washington D.C., and the 1965 march for voting rights in Selma, Alabama. Sleet also covered the rise of independent African nations, including independence celebrations in Nairobi, Kenya in 1965. 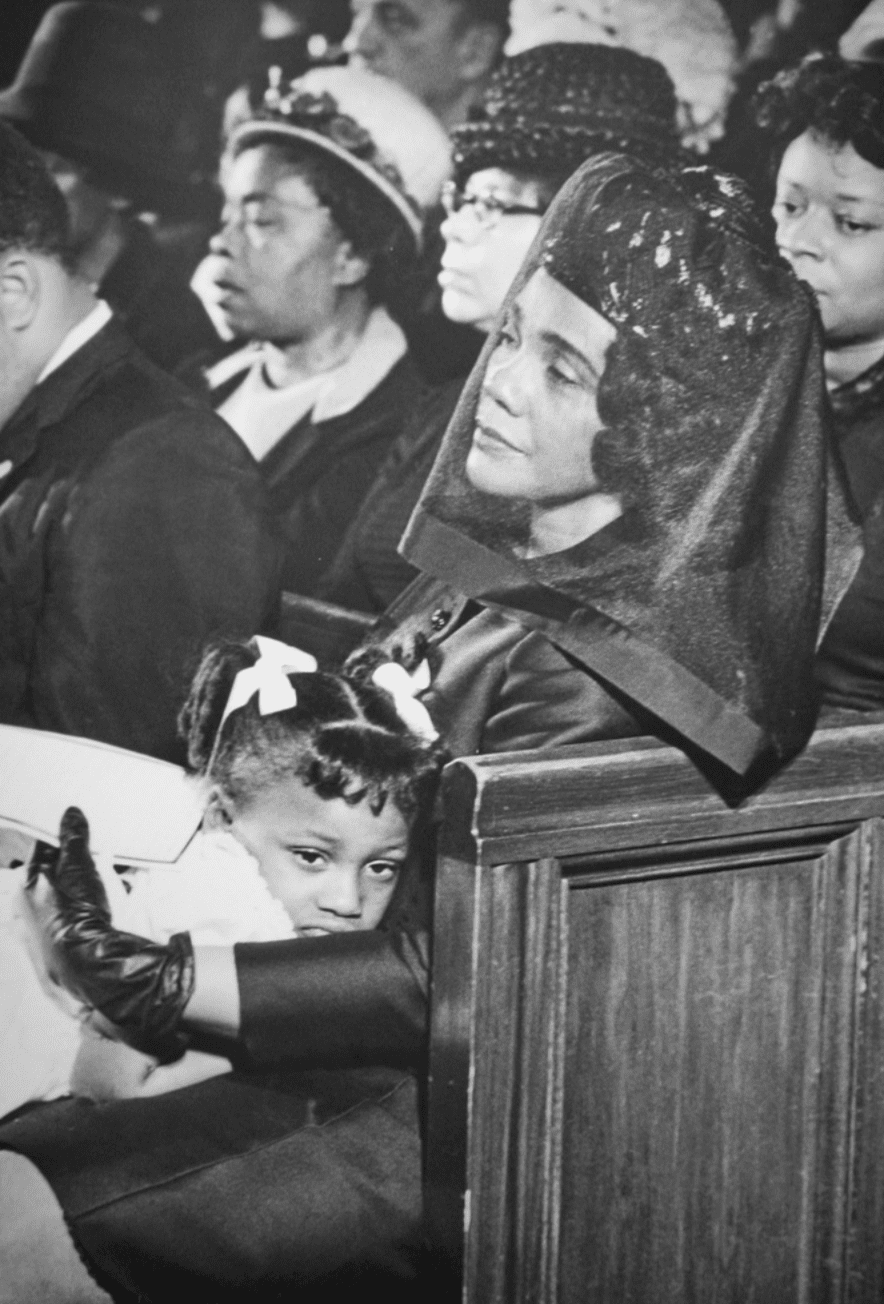 Sleet was also much in demand as a celebrity photographer.

The Pulitzer Winning Photograph that Almost Never Was 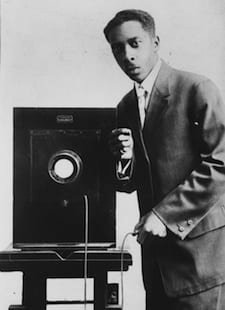 Addison Scurlock: The Photographer of a Rising Black Society in Washington

Addison Scurlock was born in Fayetteville, North Carolina. Following his high school graduation, he moved to Washington D.C. with his family. Soon after he began a photography apprenticeship under Moses P. Rice.

Scurlock opened his first photography business in 1904, later opening his storefront studio in 1911. His mission was to make his subjects ‘look good,’ and he delivered on this mission with excellent technical skills in posing, lighting and retouching.

In later years, he was joined by in business by his sons George and Robert. 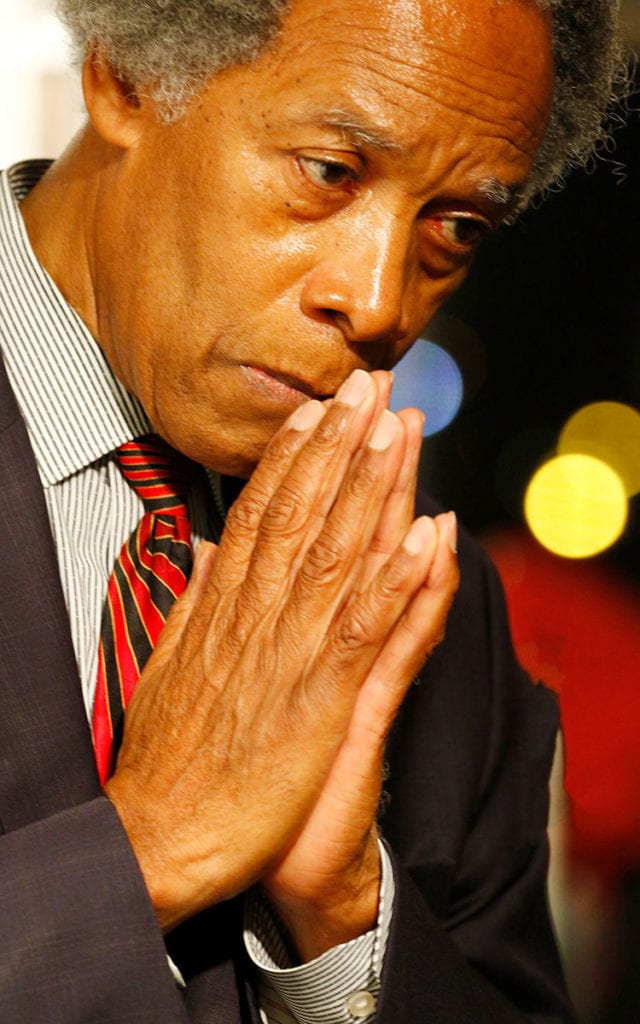 “I light candles, I don’t curse the darkness,” he said. “Even now, my colleagues are cursing the darkness. I’m lighting the candles. And I give wings to dreams, I ain’t breaking no wings. I’m not clipping any wings. Make a difference in the world. One light. One day. One image.”

Deeply Influenced By His Minister Father

Pulitzer Award-winning photojournalist John H. White was deeply influenced by his Methodist minister father, who made it a point to expose his sons to the best and the worst the world had to offer. The influence of this father instilled a deep love of people in John that shines through in his photography.

White decided to pursue a career as a photographer while enrolled in a commercial art program. He said that at the time, he decided that photography was the “best and simplest means of expression for me …”

White began his career with Chicago Daily News, then moved to the Chicago Sun-Times in 1978. He remained with the Sun-Times until 1993.

White’s photojournalism assignments took him all over the world, including Russia, South Africa, Mexico, the Middle East and Asia. In 1979, he covered Pope John Paul II’s visit to Mexico as one of the few photographers approved by the Vatican.

To honor his long career and body of work, White received the Pulitzer Prize for Journalism in 1982.

White was one of 200 photographers who participated in the largest photographic project in U.S. history, the 1986 “Day in the Life of America.”

As well as being employed by the Sun-Times, White also taught photojournalism at Columbia College Chicago, passing on the torch to the next generation of photojournalists.

The ‘Eyes of the World’

One of White’s most inspiring quotes is, “A photographer can be the eyes for the world. It’s a privilege and a tremendous responsibility.”

There is no better way to sum up the achievements of these men than those words. Their work helped break down racial barriers and shine a light on the issues of injustice and poverty. We owe them a debt of gratitude.

"Kentucky State graduate was the eyes of black America"

"The Scurlock Studio: Picture of Prosperity"

"Meet a Pro: John H. White on Shooting From the Heart"

By Brenna Sanchez for Encyclopedia.com. Updated Jan 20, 2020. Found at: https://www.encyclopedia.com/education/news-wires-white-papers-and-books/white-john-h-1945

From Wikipedia.org. Found at: https://en.wikipedia.org/wiki/John_H._White_(photojournalist) 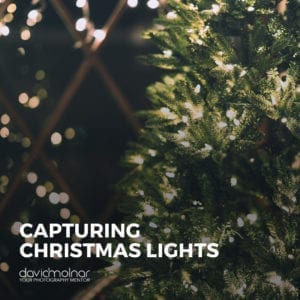 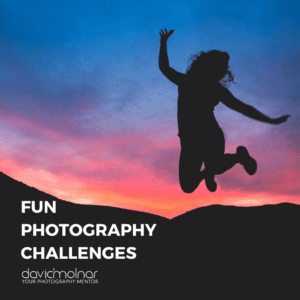 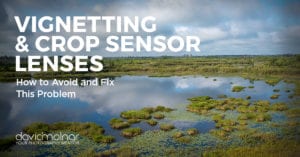 The Secret to Tack Sharp Photos